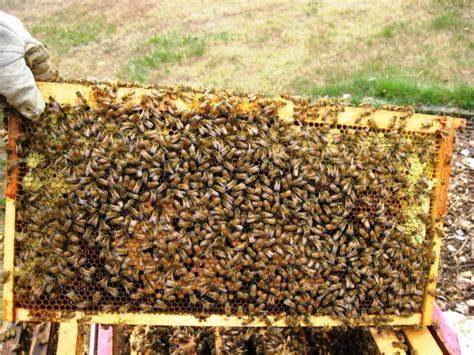 Most people would consider a dog, cat, fish, or maybe a hamster for a pet. For some owners it might be the companionship they receive from keeping pets, like having a friend, or others might enjoy the attachment and fun that comes with being a pet owner. But for senior Mark Nalepa, keeping bees is how he chooses to spend some of his spare time.

Nalepa has been beekeeping for about a year now at a family farm in Armada on about thirteen acres of land.

If being stung by bees bothers you, then beekeeping might not be the thing for you. However, bee stings have never stopped Nalepa from going out and trying something new. He always had an interest in insects and bugs, so one day Nalepa decided to start researching and before long he had three hives.

“I bought all the hive equipment; the bee suit, the hive boxes, the frames, and it all ran for about $700 for start ups but that’s because I have three hives,” Napela said. “I read two books on beekeeping just to make sure I knew what I was doing.”

Nalepa hopes to start making more products besides honey. He also plans to start selling the products he produces.

In fact, being stung is just part of the process, yet it shouldn’t stop those who are interested. However, safety is the first priority so it is important that you to take the proper steps before getting the bees and after to insure everyone’s safety.

“The bees come in this wire frame box so you just take the lid off and shake them into the hive,” Napela said. “I was shaking the box and they were really angry because it was really cold and they don’t like the cold and they’re being thrown around and my bee suite was not put on properly and they got in there and I got three stings on my back.”

As seasons change Nalepa has to take certain precautions to make sure the bees are safe from the brutal Michigan winters. For the most part the bees are able to provide for themselves through the winter. As the cold approaches bees go into hibernation, so the whole winter they stay in their hives until spring rolls back around. When bees hibernate they vibrate their bodies in order to keep warm and with all the bees in the hive it can get up to 90 degrees Fahrenheit.

“They keep themselves warm but we put this entrance guard to stop the heat from escaping then we will put a tarp over it to keep it out of the wind,” Nalepa said, “so the snow and wind doesn’t hit it as hard.”

And for those who would like to start looking into beekeeping Nalepa has recommendations.

“Make sure you’re able to check on them regularly because if you can’t they make this stuff called propolis; it’s like cement and it seals the hive and you won’t be able to get it open anymore,” Napela said. “Just make sure you research your bees.”

Nalepa also requests to check for ant colonies that try to march into the hive to steal honey. As well as mice that sneak into the hive to keep warm during winter. It would be best to check the hive regularly to make sure everything is going as it should be.

Bees are also very low maintenance for those worried about too much responsibility, so there wouldn’t be much too take care of.

“You don’t really have to do much, only check on them about once a week and make sure everything is going good, they don’t have any invaders in there, and just make sure they’re alright,” Napela said. “Then in the winter you only have to check on them  once or twice the whole season.”

Over the last few years bee colonies have been rapidly disappearing which means there may be a shortage of honey, Winnie wouldn’t approve. Nalepa encourages others to take up bee keeping ,like he has, in orders to prevent the honey bees from going extinct.