Body modifications are the new mainstream.

High school students are more accepting than ever of tattoos and piercings. 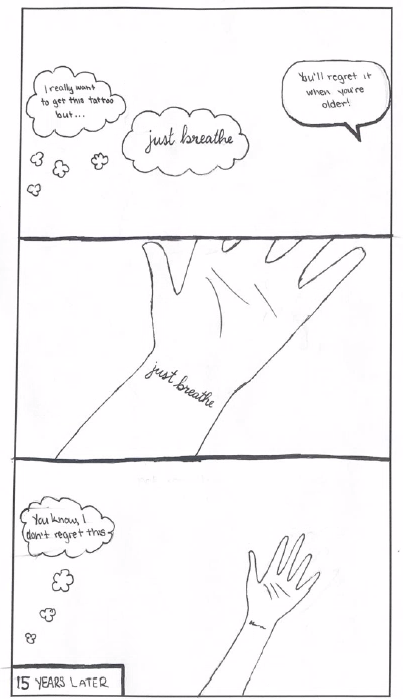 Of course, when anyone goes over the top and becomes covered in ink or has “unnecessary” piercings, they may get more looks than usual from those judgmental types. It’s different when an adult pursues getting a tattoo, though. They are not turned down or shamed for wanting to have one, and that includes piercings, as well. All they have to do is pay the price and it’s as simple as that. But when it comes to adolescents getting tattoos or piercings, most adults find it to be mindless. If a teen makes the decision to get a piercing or tattoo themselves, they still need their parents permission so the artist or piercer can do it legally. Adults don’t have to do this because, to the law, they are old enough to decide if they want something that is potentially there for the rest of their lives.

Being “too young” and not understanding that tattoos “last a lifetime” is usually thrown into the argument of parents’ disapproval of teens wanting a tattoo or piercing. Yes, it may be quite foolish for a parent or guardian to let their child get a tattoo or piercing, but it depends on the individual. As we see it, as long as a minor is independent enough to be able to make most of their decisions themselves, why not let them choose what they want to do to express themselves?
A person under the age 18 shouldn’t be shamed. The same goes for uncommon piercings among high schoolers, such as gauges, eyebrow or lip piercings. People are drawn to look at something they don’t see every day, so this could explain the attention it brings when a younger person has these attributes. Even if it is appealing to the eye, these younger individuals should be looked at as normal people, just as a student without piercings or any tattoos. Sure, they may look different, and they may have different views as those who are waiting to get something as permanent as a tattoo, but most just have a carefree view on doing what makes them happy.

In more recent years, the changing of one’s appearance has been more widely accepted, even if it is permanent. Most people stick to the things others find normal, but more and more people are starting to do things other people are not. As some adults see it, it could be an act of rebellion. But as we see it, it is just a younger individual being themselves unapologetically.

Any younger person with noticeable differences from the rest should be treated equally. Kids, adolescents and even adults are influenced by others and things around them. We all see what is popular and take it or leave it if it doesn’t fit with our interests. When things become a trend, people are more likely to be into it. This isn’t always the case, but with tattoos and piercings, it has gone from something that was once negative and even shameful to something that is positive and shows true creativity or expressiveness.

Tattoos are a form of art and they show creativity. To be shamed for having something is unfair. A person’s choice to get something tattooed is their choice at the end of the day. Everyone has their freedom of speech, it should be obvious that everyone has their own choice to represent themselves how they want.